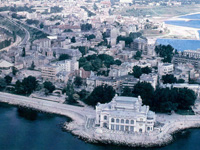 The third as size in Europe, the Black Sea bathes with its waves the South –Eastern seashore of Romania. The Romanian beach of the Black Sea lies on 153 miles length, between Midia Cape at North and Vama Veche at South. On the seashore there are the famous summer resorts Mamaia, Olimp, Neptun, Venus, Jupiter, Saturn and Mangalia. The latter is in the neighbourhood of Constanta town, the biggest seaport with opening to the Black Sea from Romania.
Constanta town, known in antiquity under the name of Tomis or the town of the Latin poet Ovidiu, was founded in the 4th century B.C. by Greeks and which developed subsequently under Roman domination when it received the name of Constantin emperor. 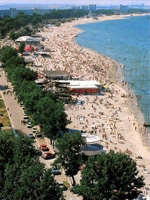 Important objectives: The Archaeology Museum of the town which has an extraordinary collection of roman statues, The Roman Edifice with Mosaic architectural complex dating back from the 3rd century, The Navy Museum, Paris Constanta Casino, The Genoese Lighthouse, Mahmud II’s Mosk.
Other special objectives in the area: Histria fortress situated near Sinoe Lake. At origins a Greek colony, the fortress was built on the western shore of the Black Sea, at the middle of the 7th century B.C. being considered the oldest Romanian Town and discovered as a result of archaeological excavations in 1914.
At north from Adamclisi there are the vestiges of the Triumphant Monument (Tropaeum Traiani) erected in the honour of the Roman emperor Traian, for celebrating the defeat of the Gaeto-Dacians in the fights that took place in the year 102. In the same locality one can find the ruins of the fortress Tropaeum Traiani considered to be the biggest Roman settlement on Dobrogea territory.